As Tennessee grapples to curb the deadly toll of prescription drug abuse, Shoulders’ death four years ago represents another cost that may not be so apparent — but is just as devastating.

Hundreds of Tennesseans are killed in crashes involving a driver using drugs. The number of deadly crashes that involved drug use has surpassed deadly wrecks involving drunken and distracted drivers. 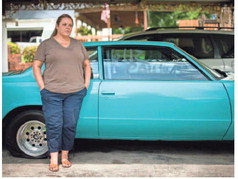 Tina Baltz with her brother Paul Shoulders Jr.'s Malibu drag racing car. Shoulders was killed by an intoxicated driver in 2013 and Baltz kept the car as a way to remember him.