Knoxville Police Chief David Rausch spent roughly $18,000 in taxpayer money to travel on nearly a third of the days in 2017, records show.

Rausch took 47 trips that spanned 116 days and 15 states, plus Washington, D.C., where he trekked four times. About half of his trips were to other cities in Tennessee.

Rausch’s travel is detailed in a spreadsheet disclosed by the Knoxville Police Department in response to a public records request from USA TODAY NETWORK - Tennessee. The document provides insight into the busy schedule of Knoxville’s politically active and well-connected police chief.

Rausch said the cost of his trips is dwarfed by the funds he secured for the city by participating in a plethora of board meetings, panels, hearings and conferences.

‘People invest in the people they know’

In discussing his travel, Rausch compared his role as police chief to that of a business’s CEO. The goal of many of his trips is to form and maintain relationships with decision-makers who can grant the police department money and other resources.

“When people know who you are and what you’re doing, it’s like any other business,” Rausch said. “People invest in the people they know.”

Rausch aims to raise Knoxville’s profile on an international stage and to ensure the interests of the city and the department are represented in policy discussions in Nashville and Washington.

The chief has already been to the nation’s capital twice this year. In one trip, on March 1, he traveled with the executive board of the International Association of Chiefs of Police, on which he holds the title of general chair of midsize agencies. 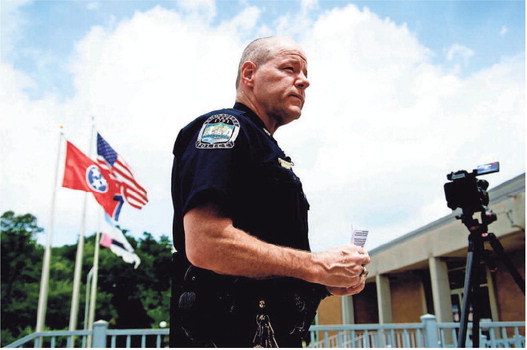 According to Rausch, a dozen board members met with U.S. Attorney General Jeff Sessions to discuss marijuana policy and training for forensic technicians. They spoke with Kellyanne Conway, once President Donald Trump’s favored cable news defender who has now been tapped to helm the opioid agenda, and Jared Kushner, Trump’s son-in-law, who has been working on a plan for prison reform.

“I had the opportunity to pitch the HIDTA that I work for, that impacts our community,” Rausch said, referring to the Appalachia HIDTA, which covers Tennessee, Kentucky, Virginia and West Virginia. “And (Carroll) was very complimentary, quite frankly, of the work that Appalachia HIDTA does.”

Rausch’s role on the Appalachia HIDTA board has already proved lucrative. KPD has received more than $100,000 through the board, he said. That money helped equip officers with the lifesaving anti-overdose drug naloxone and funded an investigative task force that targets drug dealers tied to overdose deaths.

Determining exactly how much money Rausch has raised on his trips is difficult, as the impact of a face-to-face conversation isn’t always tangible or immediate. But money “continues to come to us because of the relationships we’ve built,” he said, and travel “is key to building those relationships.”

On some of his trips, Rausch shares insights he’s gained through his work in Knoxville. He said he’s constantly asked to speak at conventions because, “Unfortunately, I’ve become an expert in the opioid crisis.”

In November, Rausch traveled to Washington to testify on a panel for the U.S. House Committee on Homeland Security. The topic was “World Wide Threats: Keeping America Secure in the New Age of Terror.”

Rausch spoke in part about how KPD handled a rally and counterprotest centered on a Confederate monument in Knoxville’s Fort Sanders neighborhood. Police seized control of the area early, kept both sides separated, screened attendees with metal detectors and forbade guns, masks and various items that can be used as weapons.

No violence broke out, and only one person was arrested, a result that stood in stark contrast to the “Unite the Right” rally that had turned deadly in Charlottesville, Virginia, just two weeks prior.

Those types of trips “highlight the great work that’s going on” at the police department, which provides more exposure for the agency, Rausch said.

Exposure, in turn, attracts resources, recruits and researchers. But it also attracts federal law enforcement agencies, which have a habit of poaching KPD officers, Rausch said.

“While we don’t really like that they come in and take our folks, it’s really OK,” he said. “Because we benefit because of the partnerships, and we know somebody.”

Rausch offered an example: Tommy Mays, an FBI agent who served as former FBI Director James Comey’s bodyguard, is a former KPD officer. Steve Cook — whom Sessions appointed as an associate deputy attorney general to address violent crime in cities — is a KPD alumnus, as well as a former federal prosecutor.

Rausch said he can call them when he needs something.

“It’s great to have the access to somebody that has the ear,” he said.

‘It’s the unknowns that you can’t plan’

The chief was flying back to Knoxville from Washington that night of Jan. 11. Rausch said he arrived in time to be “at the hospital when they took the bullet out of (Williams’) shoulder.” It was Rausch who briefed the media around 11 p.m.

The potential for a crisis “exists every time we travel,” Rausch said, adding that he’ll always stay in town for scheduled events like the Fort Sanders rally but, “It’s the unknowns that you can’t plan.”

“The key is being able to get back here to let our officers know that I support them.”

Rausch said he’s confident in the ability of his four deputy chiefs “to hold things together until I can get back, especially in a critical situation.”

On the campaign trail

As he juggles his duties at home and abroad, Rausch also is running a campaign — for fourth vice president of the International Association of Chiefs of Police.

Much of Rausch’s interstate travel last year was for IACP. Now that he’s on the executive board, the organization pays for those travel expenses, he said. Overall, Rausch took 17 trips last year at no cost to the city, according to the spreadsheet.

Rausch said those trips are funded not by the city of Knoxville, but by his own campaign fund, for which he raised $20,000 — the limit. He doesn’t suspend his salary, which is $152,175, for those trips.

“My salary is my salary. ... When I’m gone, it doesn’t mean that I’m not working,” he said, adding that he works well beyond 40 hours a week and stays connected by constantly fielding calls, emails and text messages when he’s away from Knoxville.

In a statement, Knoxville Mayor Madeline Rogero said Rausch “is always accessible for me and his command staff at any hour of the day or night,” whether he’s in town or elsewhere.

“I review and approve all of his city travel, which is largely necessitated by his leadership roles in professional law enforcement associations,” Rogero said.

Four city council members reached by phone recently — Seema Perez, George Wallace, Stephanie Welch and Mark Campen — said they knew of no problems with Rausch’s travel. Perez described the chief as open and available, while Welch said he is responsive and professional.

City council member Marshall Stair said he supports Rausch’s travel but said, “The quantity seems a little high. But overall I think it’s probably a reflection that we’ve got a good police chief, and he’s in demand other places.”

‘The face and the voice of law enforcement’

If Rausch wins the IACP election in October, he’ll automatically climb one rank each year. The positions are not paid and come with no paid speaking engagements, he said.

In five years, Rausch would be president of IACP. That could mean more travel, as Rausch said the current president has 12 international trips on his schedule.

“The importance of the presidency ... is you then become the face and the voice of law enforcement in the world,” Rausch said.

“And the other advantage to that is that people recognize where you’re from, because you always say where you’re the chief at. So it puts our community on a different level.” 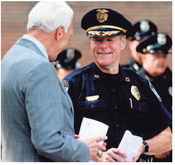