Angelic Ministries not moving from downtown

The Rev. Tony Earl isn’t yet sure how Angelic Ministries International Inc. will use the 38,000-square-foot church building in the Halls community that it purchased earlier this month.

But, laying to rest rumors rampant on social media, he said he does know how it won’t be used.

It won’t serve as a drug rehab center or a halfway house for former addicts.

It won’t be a homeless shelter or day center for homeless people from downtown Knoxville.

It won’t be a threat to graves in the adjacent cemetery, neighborhood children, or property values. 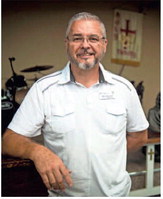 “We have no desire to move our ministry anywhere — it is ideally located for what we do,” Earl said. “It serves the families in our city well. It’s really a wonderful complex for groups to come in and (volunteer) in the inner city, and it’s good for our men’s program because it’s on the bus line.”

Founded in 2002 by Betsy Frazier, the faith-based nonprofit has a mission of helping “families in crisis,” and nothing else takes precedence over that, Earl said. At the North Central building, it operates a “store” where families referred by churches or agencies can “shop” for donated toiletries, cleaning supplies, clothes, household items and furniture.

The 65,000-square-foot building also houses two other programs: a church service for Knoxville’s homeless population, and a yearlong “life-retraining” program through the national Christian Men’s Job Corps for men who are starting over — from homelessness, abusive situations or other challenges, Earl said.

Some, not all, of the men have been incarcerated or struggled with addiction, but Angelic doesn’t handle detox or rehab: “We’re not certified for that,” Earl said.

Nor do the men live at the main facility, though they work there daily, taking in and sorting donated items. Some live short-term in houses owned by Angelic, paying below-market rent. The nonprofit owns 11 other properties, including a duplex donated to it, and rents some of them to provide income for its ministries, Earl said. Its 2015 assets, reported to the IRS in January, were $323,267; all but $29,952 of its $276,084 revenue that year was from donations or grants.

The Halls church building at 4805 Fort Sumter Road, on which Angelic closed earlier this month, was purchased to expand its ministries, not relocate them, Earl said. In fact, the board had only recently begun to look at other properties, including a lot adjacent to an inner-city house it already owns, on which it considered building.

A board member’s family member recommended they look at the church, originally Salem Baptist Church and most recently Halls Christian Church, which listed the building with a real-estate agent after it merged with Lighthouse Christian Church in Powell in September.

Earl said Angelic paid about $300,000 cash — of which $100,000 was donated specifically for that purpose — for the church, which sits on 5.5 acres and included kitchen appliances, sanctuary pews and pipe organ, and a security system. Aside from some minor water issues in the basement, it’s in good shape, he said.

It was the low cost for the space that led the nonprofit to make the purchase without a clear plan in mind, he added.

“It’s like Abraham: God said, ‘Leave, and I’ll tell you where to go,’” he said of the decision. “We bought it on faith.”

Some possible uses include a donation collection site; a “low-cost boutique” for families in need, stocked in part with donations from the North Central site; a community garden (part of the property is zoned agricultural); overnight accommodations for church college-age and youth groups from out of town who come to volunteer at the inner-city site; community center-type programs for senior citizens and at-risk youth in Halls and the surrounding rural areas; recreational space for small churches to have their own church picnics and other events; and low-cost satellite office space for counselors and other agencies whose mission and values are in line with Angelic’s.

Earl said before deciding anything, Angelic Ministries will survey area businesses, churches, community members and agencies to assess what needs exist in Halls and make sure they’re not duplicating something already offered.

“We believe there are families in need in Halls as well as the inner city,” Earl said. “They may not look like the same but needs are, nonetheless, still needs.”

The nonprofit’s board members will also host an open house at the church building at 7 p.m. Nov. 6, so community members can come and ask questions.

Earl said he moved to Halls when he was in the seventh grade and graduated from Halls High School in 1979. He said he entered the ministry as a youth pastor at a small church in Halls, where his mother owned a beauty salon and his father taught at the local vocational center.

“I have a love for this community, and a history there,” he said. “I love their passion. ... I hate that fear dictates to people what they think and what they say. But we’re not going to have a rebuttal based on fear.”