Joe Fox was looking for reasons to say no to hemp.

Longtime friend and “green thumb” Erich Maelzer had introduced the idea of establishing an industrial hemp processing facility as an opportunity to get into an emerging market.

It’s good timing: Wellness uses of CBD oil are becoming more mainstream, thanks in part to the Food and Drug Administration recently approving Epidiolex, a cannabidiol-, or CBD-, based medication used to treat severe forms of epilepsy.

“My own mom uses CBD oil,” Fox said. “She’s a very conservative Christian, and I never thought I’d see the day where she’s using a cannabis- derived oil, but she uses it daily for sleep.”

When Blühen Botanicals begins production at the end of the year, it hopes to become one of the largest industrial hemp processing and extraction facilities in Tennessee and the Southeast.

Fox wants to make one thing clear: Hemp is not marijuana. Commercial hemp production was legalized in Tennessee in 2016.

Industrial hemp, a form of cannabis sativa, is from the same plant family as marijuana but has less than 0.3 percent of THC levels, which is the psychoactive chemical in marijuana, according to the Tennessee Department of Agriculture.

“You could smoke this entire facility and it’s not going to get you high,” Fox joked.

The Department of Agriculture estimates almost 56,000 metric tons of industrial hemp are produced worldwide each year. Blühen Botanicals is monitored by the department and undergoes third-party testing and abides by FDA-level 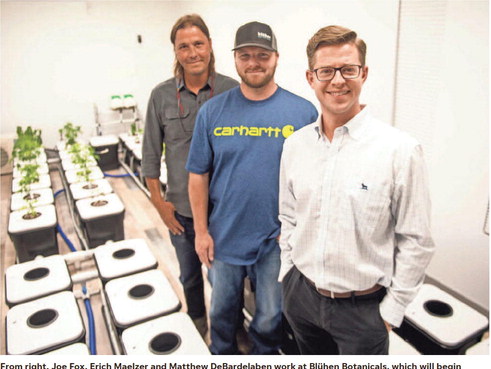 From right, Joe Fox, Erich Maelzer and Matthew DeBardelaben work at Blühen Botanicals, which will begin production at the end of the year. BRIANNA PACIORKA/NEWS SENTINEL

At Blühen’s facility, at 2209 N. Central St., Tennessee farmers will bring their legally grown industrial hemp for processing. The facility will extract and produce two types of CBD oil: One type will be 85 percent pure and will have some formulations with trace amounts of THC and some that are THC-free. The other will be 99.99 percent pure and THC-free.

Having THC-free options eliminates any legal gray areas across state lines for buyers.

The 18,000-square-foot facility will be capable of processing 2,000 pounds of hemp biomass per day.

“Once we extract the CBD oils from the hemp plant, there are still a lot of things that can be accomplished with that spent biomass,” Fox said.

There are about 25,000 uses for processed hemp, according to the Department of Agriculture, and other processors in East Tennessee could use the processed hemp biomass for making bio-plastics or disposable, paperlike products.

The appeal for Tennessee farmers

The Blühen team is building relationships with farmers around the state, lauding hemp as an emerging crop as tobacco and dairy industries struggle.

Hemp plants need attention and care much like tomato plants. Many tobacco farmers have the infrastructure in place for an easy transition to hemp with simple modifications.

“I’ve talked to farmers who have a quarter acre, half acre, 100 acres, and they can all grow and be profitable (with hemp),” farm adviser Matthew DeBardelaben said. “Right now corn, soybeans, the other commodity crops, you have to have a really large farm to (turn a profit).”

The U.S. Department of Agriculture estimated net farm income is forecast to decrease 13 percent in 2018 from 2017, or about $9.8 billion.

Much of Blühen’s CBD oil will be sold wholesale to wellness industry retailers and distributors. CBD oils are used to treat inflammation-based ailments, anxiety, insomnia and chronic pain.

Don’t confuse over-the-counter CBD oils for medicinal marijuana, which is not legal in Tennessee. So far, Fox said, most people are eager to learn more once it’s clear that CBD oil doesn’t induce a high.

Blühen will release its own retail line of oils, but not until 2019. For now, Fox is focused on getting facilities online and helping farmers hone the growing process for high yields.

Blühen, if you’re wondering, is the German word for “bloom.”

Fox estimated Blühen will have about two dozen employees in two years. Construction has started on the processing facility at the former home of Charlie’s Pie Shop, which Fox owns.

The building is tentatively approved for a $75,000 facade improvement grant, according to economic development project manager Ken McMahon, a figure based on eligible square footage. The funds will be used to bring the building back to its original look, open up the original windows and put in pedestrian scaled lighting.

Though Fox proclaims he’s “never been a hemp or cannabis guy,” he believes his team will play a pivotal role in shaping the hemp industry in Tennessee.

That’s part of a national industry estimated to reach $2 billion a year by 2020, a conservative estimate in Fox’s mind, given the federal government’s acknowledgment of a cannabis-derived drug.

Fox was meeting with an organic hemp farmer outside Denver when the potential of CBD oil hit home. The farmer’s daughter had been suffering from major scoliosis and was unable to function without opioids, until discovering CBD oil.

“We’re all going to learn a lot over the next few years about how much of an impact the hemp industry is going to make as a whole,” Fox said.