We’ve all been there — either under age but still wanting a fun night on the town or at a point in your life where you just don’t drink.

If you’re reading this, one of these scenarios might describe you.

With the beginning of classes at UT comes the hope of late nights that stretch into early mornings with close friends — and maybe even some new friends along the way.

But whether it’s your first day of class or the start of your work week, a night out is just around the corner. And not every trip to the bar has to include a drink.

These Scruffy City spots are giving Knoxvillians a place to enjoy the sober side of nightlife.

Nearly every article I’ve seen about sober nights out or things to when you’re under 21 includes taking a trip to the movie theater. But I didn’t want to be that basic. So my suggestion is not just a movie theater, but one of the most unique spots in town: Central Cinema.

Opened in August 2018 by the creators of the Knoxville Horror Film Fest, the community-style theater in North Knoxville’s Happy Holler neighborhood prides itself on the community it serves and the importance of independent filmmaking.

A couple nights a week, Central Cinema shows a variety of independent, classic and cult-favorite films on its single screen. You’ll often find me and other movie buffs enjoying a showing of Star Wars, Jurassic Park or some over-thetop, low-budget slasher flick.

If Central Cinema is my spot on the weekends, then The Pilot Light is my spot on Monday nights. That was especially the case when I was a student at UT.

No, I wasn’t there for the beer — I wasn’t quite old enough for that yet. I was there for the laughs with both friends and strangers. Or should I call them new friends?

Located in the Old City, The Pilot Light is an independent entertainment venue that serves up just as many good laughs at their weekly Friendlytown comedy show as they do good drinks. The venue is intimate, making it a great place to meet locals. with a small stage hosting up-and-coming musicians and comedians nightly.

Bluhen Botanicals is one of Old City’s newest, hippest and most unique spots. The hemp and CBD production company opened in May 2019 and has been drawing Knoxvillians back for its CBD products, as well as its small restaurant

and bar that incorporates food-grade hemp products into the menu.

The modern and sleek location offers the “full spectrum of hemp extract oil, softgels, premium hemp flower, prerolls, hemp vaporizers and more.” Visitors can also enjoy a lounge, community meeting space and hemp-inspired cafe. And the menu might be somewhat familiar to you, as Bluhen partners with several local businesses that include Paysan Bread, Phoenix Pharmacy and Holly’s Gourmet Market.

OK — maybe it’s not fair to include an entire section of town as a place on this list. But there are so many options for the sober and under-21 crowd.

First of all, exercise and being in the wilderness brings more joy than any cup of alcohol can. And South Knoxville caters to outdoor enthusiasts. But I suppose that’s not really nightlife. Nightlife comes after the jog, bike ride or paddle boarding excursion.

Business is booming on Knoxville’s Sevier Avenue, transforming what I call SoKno’s Main Street into a popular spot for adventure seekers to gather for food, fun and games due to its proximity to Knoxville’s urban wilderness.

Located in a former mechanic garage, Southside Garage is a new bar and food truck park that’s suitable for everyone. Trust me, kids love to run around the place.

Aside from being an open-air bar with a patio, the space also has plenty of activities for people to enjoy. The outdoor space is home to cornhole and a variety of fun lawn games, while the interior hosts weekly trivia nights. And if a bar scene isn’t in the cards at all, just go next door to the attached Gelato Brothers shop for a quick and tasty treat.

Don’t let your eyes fool you — the small blue house on the corner of Sevier and Island Home is actually a restaurant known for creating foods rich in taste and influence, including a small ten-item menu of Chinese and Cambodian- inspired dishes. But that’s not exactly why the Landing House made the list. Every Thursday night, Landing House hosts karaoke in a beautifully intimate space, making the whole place feel like you’re among friends and family — and important characteristic to have when it comes to singing terribly in front of strangers.

Originating in Asheville, North Carolina, Hi-Wire Brewing has recently made Knoxville its new home. Well, it’s more like a vacation home, as the brewery has multiple locations in the Tar Heel State.

Although this hip, circus-themed bar has only been open a couple weeks, it’s already drawing in the crowds with colorful murals and a variety of fun activities — enough to keep people so busy that beer can become an afterthought for those not old enough to partake in drinking but who still want to go out with their of-age friends.

There’s a modern photo booth, ping pong, some disc golf holes, foosball and soccer pool. Yes, soccer pool — a game where you kick balls into pockets located on the ground instead of using a stick. Warning: it’s way harder than it looks. 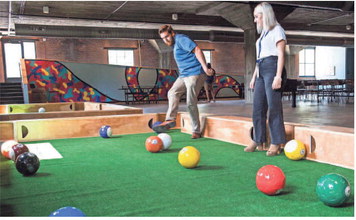