In the ad, Harwell notes she is the only top-tier Republican in the race who supports medical marijuana.

“Many suffer. Veterans, children with seizures, cancer patients, our elderly,” she says in the 30-second ad. “I just know if it were my little one I would want this option.”

In the ad, Harwell includes a clip of President Donald Trump while suggesting he supports medical marijuana.

“Opioids must not be our only option for those in pain,” Harwell concludes.

Introducing her new ad at a news conference in Nashville, Harwell, who was joined by two doctors, pointed out that she supported medical marijuana. Her views on the product, however, were not new, as evidenced by her support for a medical marijuana bill earlier this year.

“As governor I would pursue this option that is right for Tennessee and has overwhelming citizens’ support,” she said, noting that she was not in favor of recreational marijuana or smoking the product.

Harwell said she was advocating for the use of oils and additives which she said have been proven to provide tangible benefits.

Harwell did not use Friday’s news conference to present any new ideas in terms of medical marijuana. Instead she expressed confidence in being able to work with the General Assembly to come up with a proposal that “respects law enforcement” while restoring the helping those suffering from pain. Earlier this year, as lawmakers were considering legislation that would have allowed medical marijuana in Tennessee, Harwell threw her support behind the measure. She even cast a key tie-breaking vote to ensure the bill made it through a committee.

The speaker said Friday she would like to see a “reasonable, limited approach” in terms of legalizing medical marijuana and rejected the notion that cannabis is a gateway drug.

One of Harwell’s GOP opponents — Black — has said using cannabis can lead people to other harder drugs.

Harwell previously said her support for medical marijuana was informed by her her sister, who lives in Colorado and used medical cannabis to deal with a back injury.

When the last minute press conference from Harwell — which came as early voting continues and as she trails in most polls — was announced on Thursday, some political insiders suggested the speaker might drop out of the race.

She has struggled in terms of fundraising and name recognition.

Harwell later rebuffed such suggestions, saying on Twitter that she is “in it to win.”

On Friday, Harwell remained confident about her chances of winning the GOP nomination.

“The largest block of voters are undecided,” she said, adding the two frontrunners in the race, who she did not identify, have either stalled or declined in new polls.

“I feel very good that we have an opportunity to peak at just the right time,” Harwell said.

Prior to the news conference, the Tennessee State Employees Association, which previously endorsed Harwell, encouraged its members to attend Friday’s announcement by offering free gift cards to Subway and Chick-Fil-A.

“Let’s show up and show her some support!” Paul Overholser, government affairs director of the TSEA, wrote in an email obtained by the USA-TODAY NETWORK-Tennessee. 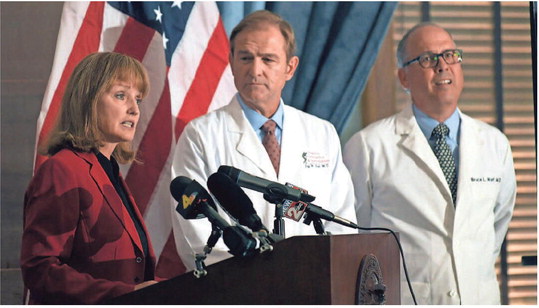