The women in Knoxville Area Rescue Ministries’ Serenity recovery program had a beautiful setting: a historic house on a quiet, leafy, securely gated campus in which to recover from abuse or addiction and get skills to move forward with their lives.

But as lovely as it was, the house could be a bit cramped with more than 30 women and some of their children packed into hallways or sitting on floors for classes and meetings. The kitchen was small. The bedrooms and common areas were haphazardly furnished, many with used donated furniture taken from KARM’s network of thrift stores.

The women deserved better, KARM officials decided in 2013, before embarking on a $5 million capital campaign that earmarked $1.3 million for renovations and an addition to Serenity. The house it’s in, built in the 1800s, was donated to KARM in the 1990s and last renovated in 2009, said Steve Clabough, KARM’s vice president of operations.

Of course, renovations of historic houses rarely go exactly as expected. After breaking ground on the addition in August 2017, “we hit a couple of bumps and snags,” said KARM president and CEO Burt Rosen.

Old wiring needed to be replaced. An elevator had to be installed to comply with Americans with Disabilities Act regulations. A newly enacted building code bumped the cost of insulation up by more than $40,000, Clabough said.

By the end of the renovations, the cost had grown by $300,000. About a quarter of the money came from a federal loan program, he said, but the rest was donated through the capital campaign.

Now, on Thursday, “we’ll have the joy of standing here watching the women come through the doors for the first time,” Rosen said.

The women of Serenity, who range in age from 18 to in their 60s, have been temporarily housed in a section of KARM’s main campus near downtown Knoxville. Some dealing with addiction, some fleeing domestic violence, some battling both and other demons, they receive faith-based counseling, case management and job skills training in the 18-month residential program, said Cynthia Russell, vice president of Serenity.

This includes administrative assistant skills, which women can now learn in a dedicated computer lab, and culinary training through the Abundant Life Kitchen program. The renovation included a commercial kitchen specifically for that training, which is offered at the main campus also.

The renovation included an enclosed courtyard, a ramp into the building, more common areas where women can gather for devotionals, meetings or visits with family and friends, and a dining room large enough to hold all the women at once, equipped with audiovisual technology. Paint, flooring and furniture is new.

And the bedrooms — set up for various combinations of women and their children — are newly furnished with trendy farmhouse-style beds, bunk beds, nightstands and chests, as well as brand-new bedding.

Danita McCartney, VP of development, said individuals and organizations can each sponsor a bedroom for $3,000; nine of the 15 bedrooms, as well as the front porch, have been sponsored.

“More than just a renovated facility, this is a place where women can call home,” Rosen said. “It’s not going to be their home forever, but if you had experienced what some of these women who come through our doors have experienced, and you come through these doors, you know as long as you need to be here, it’s going to be your home. And we want it to look and feel and smell like a place that you would be pleased to be, if you had to be in the situation that you are in.”

KARM is still looking to build housing that will allow families to stay together; currently, KARM has only separate facilities for women with children and men, and single men with children must be referred to other agencies.

In addition, McCartney said, there’s a need for a program similar to Serenity that would serve men.

“We’re looking for that special piece of property,” she said. 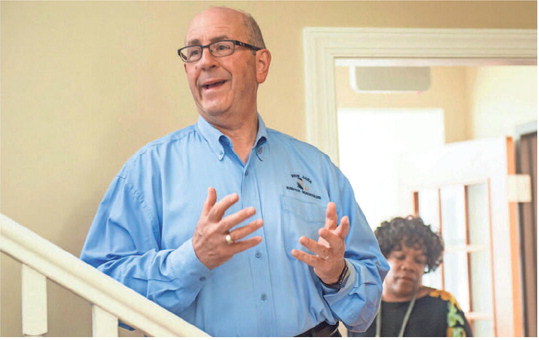 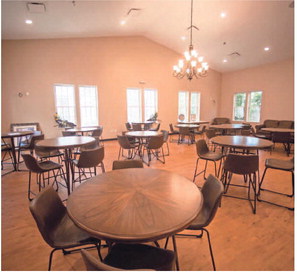