Two of the state’s largest insurers say they’ve made significant reductions in the number of opioid drugs prescribed.

In February, BlueCross BlueShield of Tennessee reported a 6 percent decrease in the number of opioid prescriptions per plan member, per month.

And Cigna announced last week it’s reduced opioid prescriptions overall by 25 percent — a year earlier than it had originally planned.

Cigna set the goal of reducing opioid prescriptions by 25 percent by 2019 because that would return consumers’ usage rates to pre-epidemic levels, the company said last week in a news release. It tracked progress by measuring the total volume of opioids being prescribed based on morphine milligram equivalent doses, looking at the number of pills, the dosing of those pills and the relative strengths of the different opioid medications.

A large part of its plan was engaging with doctors, dentists and medical groups to discuss “appropriate” prescribing and alternative methods of pain management, as well as notifying providers when it appeared a patient might be misusing medication.

In 2016, Cigna began capping shortacting opioid prescriptions for acute pain at 15 days; over the summer, it plans to limit them to seven days.

BlueCross BlueShield reported the 6 percent reduction for 2017 over 2016 in February. But Corporate Communications Director Mary Danielson clarified this week that it includes a 10 percent reduction in morphine milligram equivalent doses per prescription — “important to us from a safety perspective” — and a 52 percent reduction in the number of claims for long-acting opioids.

That focus on reducing long-acting opioid prescriptions — done with input from pharmacists and doctors specializing in pain management — was “a radical move” but a necessary one, said Dr. Natalie Tate, vice president of pharmacy management for the insurer.

She pointed out that, in 2016, more residents died of drug overdose or complications than in car crashes — and that more than half of people who use the drugs recreationally say they got pills from a friend or family member. A statewide medication collection event will be April 28; Knox County will have a medication collection Saturday at the Food City at Mountain Grove in South Knoxville.

Though the insurer received some “pretty dramatic” pushback from providers and patients, it’s since died down, Tate said.

BlueCross BlueShield’s long-term strategy involved using prior authorization for opioid drug prescriptions to look at what other methods of pain relief had been tried first, and what dosage was being giving to start. The insurer has long sponsored drug disposal lock boxes and medication “take-back” events, through its “Count It, Drop It, Lock It” initiative, as well as providing grants to hospitals and community health centers focused on reducing neonatal abstinence syndrome.

“We are looking at (state and federal legislation around prescribing) and data to understand the best next steps for us,” Tate said. “We recognize this is not something we can change overnight.” 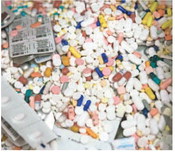 Pharmaceutical medicines confiscated from cases sit in a locked drop box in the evidence room after being accounted for in the Knox County Regional Forensics Center on July 13. The pills are turned over to the Knoxville Police Department to be destroyed. CAITIE MCMEKIN / NEWS SENTINEL