Video games were once Noah Robinson’s only way to cope.

When he couldn’t bear the challenges of growing up as an outsider, he fell into immersive worlds that eased his tensions and helped him feel less alone.

Now, as a graduate student at Vanderbilt University, Robinson is applying the same premise to an unconventional, high-tech therapy that might help addicts get a firmer grip on recovery.

By immersing them in a virtual world of swirling colors and abstract shapes, and then layering psychological principles over that experience, Robinson hopes to help patients separate themselves from the negative emotions and cravings that fuel addiction.

If he is successful, his mentors believe he could be at the forefront of a groundbreaking new treatment for addicts, one that could prove to be especially significant as the nation battles the deadly opioid crisis.

“The only thing I know for sure is that most of the stuff that we’ve been doing thus far to get our arms around this crisis has not been working,” said Brian Wind, chief of clinical operations at the Murfreesboro location of JourneyPure, an inpatient rehabilitation center where Robinson is testing his virtual reality therapy.

“We’ve got to get more proactive, and I believe that trying to find new and innovative solutions that may be of benefit to people is the way to go,” Wind said. “This seems to be just that.”

The treatment itself can seem strange to the uninitiated — strange enough that mentors initially warned Robinson not to mention his interest in virtual reality in his application to Vanderbilt.

Patients strap bulky googles over their heads and grab onto two joysticks.

From the outside, they look like a mash-up of a skier and a hardcore gamer.

But the screens on the inside of the goggles transport them, and everywhere they look reveals a new corner of a bright and surreal landscape of sunbursts and technicolor swirls. A headset allows them to communicate with their therapist, who appears in this world in the form of a cartoon avatar.

Different “rooms” in this virtual reality serve different purposes. A therapist might walk a patient through talk therapy in one, while another one designed like a bar gives recovering alcoholics the chance to practice turning down a drink in a low-pressure setting.

Robinson is quick to make one thing clear: This virtual reality, which he calls VR, is different from what people have experienced on their smartphones. It truly floods your senses, and almost completely separates you from your actual surroundings.

His theory is that the distraction of the virtual reality also will separate people from their anxieties and fears, making it easier for them to absorb messages from therapy.

Passion is driven by his past

That thinking was driven by his teenage years, when he used role-playing video games like”RuneScape” and online forums to escape the anxiety of realizing he is gay.

As he grew up and came out, he no longer craved the escape. But the impact of technology on his life lingered in the back of his mind.

While he was working as a research fellow at the National Institutes of Health in 2014, he began experimenting with virtual reality.

He bought virtual reality equipment of his own and quickly realized he could pair the same kinds of technologies he once enjoyed with innovative therapy to provide people with a healthy way to confront tough issues.

“I was just escaping, but what I saw with the VR is that its power could be used for a therapeutic purpose, not just escape,” said Robinson, who is now 26. “I realized the potential.”

Robinson was convinced the idea had legs. And when he applied to get his Ph.D. in clinical psychology at Vanderbilt, he wanted to weave it into his work.

In 2017, a campus innovation hub known as the Wond’ry gave him space and funding to buy more equipment and pursue his goal.

“It is a big, hairy, audacious goal that he’s trying to achieve,” said Robert Grajewski, executive director of the Wond’ry. “It’s almost innovative beyond its time.”

Robinson wasn’t initially sure how and where to apply the technology. It had barely even been discussed as a tool in psychology.

He came to JourneyPure for his work as a clinical psychology student and started testing the VR during sessions in 2017. Then something clicked.

“When I saw that patient who had so much pain put on the VR and start smiling and laughing, I felt chills and thought, ‘This is it,’ ” he said.

Reflecting on about 60 patients who have used it since, Wind was similarly optimistic.

“It’s rewarding to observe it when from underneath the big bulky mass you see smiles start to emerge,” he said. “They come out on the other side with an increase in positive emotions and a decrease in negative emotions.”

That’s a combination that can help prevent relapse, Wind said.

Now Robinson is committed to testing virtual reality in a scientific study that will attempt to quantify their anecdotal observations. Nine undergraduate Vanderbilt students are helping with the project, which should continue into the summer.

The hope is that patients will eventually be able to take VR equipment home, where they could have instant access to help when they need it.

As the project has moved further along, Robinson noticed a shift toward acceptance for his unorthodox idea, perhaps driven by the urgent need to find new treatments for opioid addicts.

When he presented information on the project at Harvard University earlier this month, people peppered him with questions.

Robinson’s ambitions for the technology and its applications seem boundless — he plans to devote his career as a psychologist to refining its use. 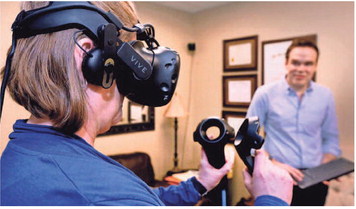 Kristin Evans, a detox therapist and clinical social worker at JourneyPure in Murfreesboro, goes through a tutorial of the virtual reality gaming system that Noah Robinson, a clinical psychology doctoral student at Vanderbilt University, uses to help rehab patients on Feb. 22. Robinson, who monitors what Evans is experiencing, tries to encourage all the therapists to try out the program so they can recommend the therapy to their patients. HELEN COMER / DNJ