Childers sings for those struggling in Appalachia

LEWISBURG, W.Va. – Tyler Childers fired off a joke, thanked onlookers for supporting the night’s cause and started his next song without a word of introduction.

The crowd of thousands gathered at this West Virginian fairgrounds swayed in a sobering subdue, pulling each other close as the 28-year-old’s leathery words poured over the field.

“Daddy, I’ve been trying, I just can’t catch a break,” Childers belted, his voice quivering. “There’s too much in this world that I can’t seem to shake/ But I remember your words, Lord they bring me to chills.

“Keep your nose to the grindstone and out of the pills.”

Poignant and timely, the Eastern Kentuckian sings this somber folk story at Healing Appalachia, a nonprofit festival organized by Childers and opioid recovery organization Hope for the Hills.

In its second year, Healing Appalachia brought a sold out audience of 7,000 to Lewisburg last weekend — nearly twice the population of its host city and more than three times the 1,700 welcomed to the grounds last year for its inaugural event, also headlined by Childers.

The 35 states represented in the crowd at Healing Appalachia illustrate the miles traveled by Childers’ magnetic and forthright songwriting; a storytelling rooted in working class Appalachia — from bar stool tall tales to earth-shattering reality and the humbling love story in-between — that 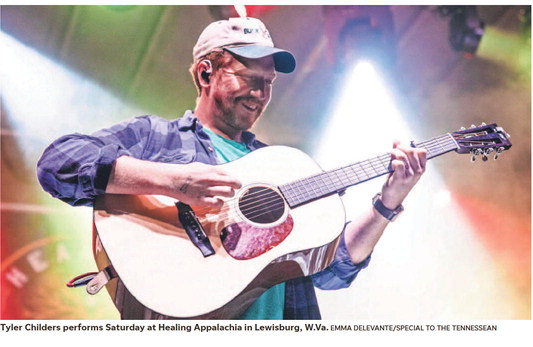 speaks a language immune to age or geography.

Childers tours this fall behind a new album, “Country Squire.” With a Springsteenian knack for penning songs that capture the spirit of a place, he continues on “Country Squire” to show why he’s one of the most important — and honest — young voices in music.

“A lot of (the songs) come from a very autobiographical person or place,” Childers told the Tennessean. “Some of ‘em maybe start there and pull from people around me or people I know, stories I’ve heard, observations I’ve seen … or total strangers.”

A native of Lawrence County, Kentucky, Childers was raised on Credence Clearwater Revival, Lynyrd Skynyrd and local hero Ricky Skaggs (scoring an autograph from Skaggs at age 5 “was like meeting Babe Ruth or somethin’,” he said).

As a child, he discovered his singing voice in church. His grandpa (“papaw” to Childers) bought him a guitar at 5, but it wasn’t until 13 that he began penning his own songs.

He tried college, at Western Kentucky University, but flunked out. Instead, Childers adopted odd jobs and spent his weekends singing in local watering holes.

“It was just a source of income on the weekends,” Childers said. “A way to get out and get some free beer. And yeah, here we are. A lot of things (happened) in-between.”

The team produced “Purgatory,” a sophomore album from Childers that would be lauded internationally for stories that captured his world with thought and sincerity.

From a tender-spirited love tale in “Lady May” to the blurry nights of “I Swear (To God)” and a burning endearment with “Feathered Indians,” the three-minute stories spread from Kentuckian hollers into hearts of listeners across the world (Dwayne “The Rock” Johnson among them).

On the road, Childers graduated from sold out clubs to sold out theaters and festival main stages, touring Australia with John Prine and opening for Willie Nelson in Texas.

In February he’ll bring his rabid following to four virtually sold out nights as part of his own run at the Mother Church.

“It’s been a trip, ya know?” Childers said. “Yeah … I’ve always had one, if not two other jobs on top of trying to do this. And there were a lot of things I wanted to go do, like, right out of college. I thought about doing the whole backpacking thing. I always wanted to travel. I knew that even if this didn’t work out I always wanted to travel and see other places.”

And Childers has traveled. His soulful blend of country, folk and bluegrass took him to distant continents and back to Appalachia, where he and longtime management team WhizzbangBAM launched Healing Appalachia last year to combat a drug crisis that cripples their native region.

“There’s a huge opioid epidemic,” Childers said. “I’ve seen it firsthand with family and friends and people I grew up with. … How do we do something? How do you raise awareness? How do you help people get help who really want the help, you know, that maybe can’t afford to get it on their own?

“Well, one thing we’re pretty good at is puttin’ on shows and getting people to come out to ‘em. That’s what we knew best and that’s what we started doing.”

Healing Appalachia donated about $22,000 to seven regional organizations last year, including sponsoring a pair of recovery center beds, said Childers’ longtime manager Ian Thorton. With its growth in 2019, the organization plans to open grant applications to fund grassroots efforts in addition and recovery.

“(We’re) spinning a light on it that needs to be spun,” Thorton said. “It’s human beings we’re talkin’ about here.”

A handful of addiction survivors took the stage at Healing Appalachia to share heart-wrenching stories of homelessness, overdoses and death.

Choked by tears, one woman tells the audience that each of her parents overdosed and died before she graduated high school.

Another survivor said she lost a fiance four years ago to overdose.

The festival offers a “drop in the bucket,” Childers understands. In 2017, West Virginia providers documented roughly 81 opioid perspectives for every 100 residents, a National Institute on Drug Abuse report said. Nearly 50 people per 100,000 West Virginian residents died in 2017 from opioid overdose, the report said, three times higher than the national average.

“What we’re doin’, while I feel very strongly about it, but it’s like putting a Band-Aid on a head gash, you know?” he said.

But art can help make sense of a muddled loneliness attached to addition. In the aforementioned “Nose on the Grindstone,” Childers shows the burden of an epidemic as its passed down from father to son.

“(Art) just lets somebody know that they have someone that understands what they’re going through,” Childers said. “Because, you know, you might be going through something and not feel like you can talk to the people around you about it or there might be some stigma about it with the people around you … “But if you hear this song on the radio or something, it speaks to you in some sort of support.”

And Childers’ writing doesn’t dodge recreational drug use. Characters etched in some of his most vivid songs come fueled by mind-altering substances.

“I was always just honest in writin’ about the experiences I was goin’ through,” he said. “If that helped you too on the way, then great. I think comin’ at it more honestly like that is a more effective way to do it.”

He continued: “That whole idea of drugs and what drugs are and what’s the good drugs and what’s the bad drugs … that’s kinda what’s got us in this mess. Just having an open and honest conversation about that will help change the landscape of how we are dealing with people going through addiction and how we help with that.”

Childers departed from Healing Appalachia (after closing with a ripping cover of Charlie Daniels’ “Trudy”) to continue the “Country Squire” run, a virtually sold out tour in support of his August full-length of the same name.

The nine-song “Country Squire” — which debuted last month at No. 1 on Billboard’s Top Country Albums chart — reunited Childers with Simpson (“we both get where we came from,” Childers said of the fellow Eastern Kentuckian) and Ferguson in Nashville. He cut the album live in a day and a half, capturing songs written from the same stretch of land that gifted country music with Skaggs, Chris Stapleton and Loretta Lynn.

Backed by slick steel guitar and whip-tight band, Childers soulfully dedicates himself to another (“All Your’n”), builds a castle for two out of a camper (“Country Squire”), offers the sticky details with long-term commitment (“Ever-Lovin’ Hand”) and returns to a working-class protagonist who searches for a hope that may never come (“Peace of Mind”).

Childers penned some of the album long before 2017’s “Purgatory,” others came in the days leading up to his studio time (and, yes, a real “Country Squire” camper exists. It’s a work in progress, Childers said).

And, with each short story, Childers captures an honesty that’s undeniably universal.

“You know,” he said, “I think that going out and seeing a lot of the world only concretes that notion that we’re all going through our own stuff and there’s stuff going on everywhere.”

“Country Squire” is out now via RCA/ Hickman Holler Records. Learn more about Hope in the Hills at healingappalachia. org.