First residents move in after transformation

South High last served as a classroom for students almost 30 years ago. Now, as South High Senior Living, it will serve as a home for seniors in South Knoxville’s Old Sevier neighborhood.

The more than $12 million, 46,000square-foot redevelopment project from Dover Signature Properties is now complete and several residents have moved into the building, which still features that classic school architecture both inside and outside.

Managing Director Rick Dover said he hopes the restoration the school and the creation of 40 new jobs is a “stabilizing force’ within the South Knoxville community.

“It was important for me that it had to work at all the dynamics,” Dover said. “Not just historic preservation, not just

neighborhood revitalization, it had to do all that and be sustainable and at a rate that is fair and reasonable.”

Dover is no stranger to transforming abandoned schools into senior living. He renovated Oak Ridge’s Oakwood School in 2015 and Knoxville High in 2018. In June, the Urban Land Institute recognized Knoxville High as one of 10 notable senior living communities in the world.

Dover recently broke ground on Alexander IV Senior Living in Macon, Georgia. The former elementary school will open in 2021. “For a place to live, (schools) actually make a lot of sense,” Dover said. “They’re often very spacious, high ceilings, lots of connectivity to the outdoors, so I think they make sense environmentally. I don’t think there’s any more sustainable type of development than repurposing existing buildings.”

South High Senior Living retains that school feel; it features the same wide hallways and the classrooms have been converted into resident rooms. The gymnasium is now a dining and lounge area.

Dover partnered with Barber McMurry Architects on the project; fitting, given that Charles Barber was the original architect for the school.

“It’s known by everyone in South Knoxville,” Dover said. Everybody loves it, and I don’t think anybody wanted to see it torn down. I’m delighted that we got to save it.”

Dover obtained the property in 2016 after several attempts by others to redevelop the space. It took about a year to stabilize the building, which included removing the roof and walls that had fallen in, and two years to renovate the existing building and construct the addition on the back of the school.

“(Knox High and South High were) both built to be grand and inspiring for students and teachers that were there, and so we’ve tried to hold onto that and keep that kind of inspired feeling throughout the buildings,” Dover said. “And that translates into things like 10foot tall windows, 12-, 14-, 16-foot ceilings. Just an abundance of space and scale that’s very inspiring.”

The assisted living facility includes 62 rooms, 28 of which are memory care rooms. Apartments come in various shapes and sizes and can accommodate singles, couples or roommates.

Because of efforts to protect residents and limit the spread of COVID-19, the facility is closed to visitors at this time and has implemented temperature checks, masks and other preventative measures to protect residents. The wide hallways and spacious common areas allow plenty of room for residents to social distance, Dover said.

“I think you get a better building in the end, something with a local, connected, real story, than you do with new construction,” he said. 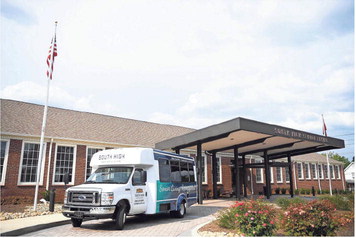